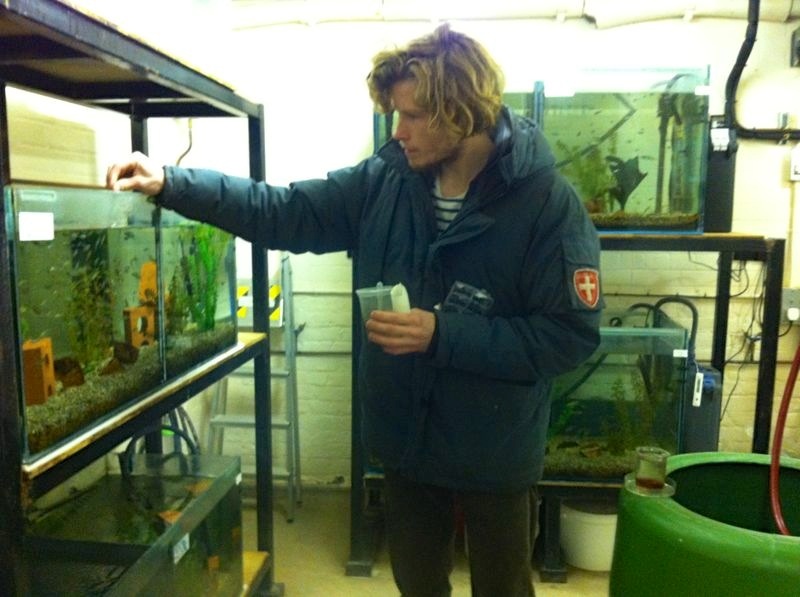 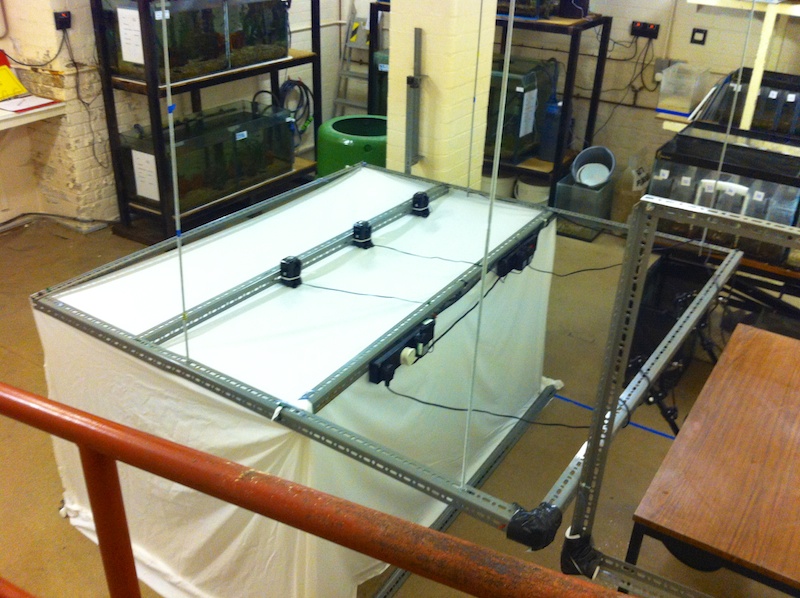 A look into my underground Cambridge fish lab. The tent houses a boldness set-up to investigate this personality trait in up to 8 fish simultaneously.

Today I am testing the sociability behaviour of a total of 40 three-spined sticklebacks that I caught in the wild near Cambridge about a year ago. To investigate sociability I build a special tank that contains two compartments, one housing a couple of other fish and one that is empty. By measuring the time fish spent near the compartment housing conspecifics I can get a sociability score for each fish and determine if fish are consistent in this behaviour (i.e. reflecting a personality trait). Today is just one testing day of a larger experiment whereby I look at the link between animal personality and leadership. It is fascinating to already see the differences between the fish without even having analysed the videos. I test the fish for 10 minutes in the sociability tank and while some fish spent more or less the whole trial next to the compartment housing the other fish, others swim around and explore the whole tank and do not really seem to be attracted to seeing conspecifics. I aim to share some videos of this experiment in the near future, so check back soon!

Update: It is 19:00 now and ten hours have passed since I entered my lab this morning. I think I spent at most 15min outside my lab the whole day. Still feeling cold in only my sweater.. but only 5 fish to go now! I reckon I should be finished with everything around 21.00. Next week another day like this to measure the consistency of sociability! But then I make sure I don’t forget my coat ;)

Finally out: We outline the most important mechanisms & consequences of fisheries-induced changes of shoaling behaviour.

The last chapter from my PhD was published today in
@CommsBio!🎉We show that fishy friends help in a crisis while strangers distract from predator vigilance, increasing the chance that they would become lunch for a hungry predator. https://www.nature.com/articles/s42003-021-02407-4

Do you wanna learn more about #RaspberryPi and its use in the biological sciences? Come and join my talk at the online @SEBiology #SEBconference this morning at 11.10 CEST!

New preprint out today about the benefits of Open Electronics for researchers and academia more broadly!

Looking for a PhD student to work on an interdisciplinary @EPSRC funded #collectivebehaviour project: